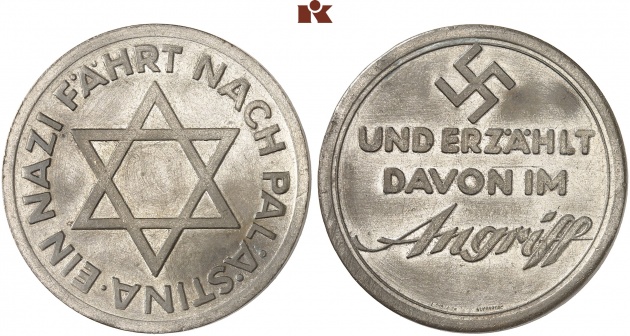 In April 1933 the journalist and SS-member Leopold von Mildenstein and Kurt Tuchler, a Zionist living in Berlin, together with their wives went on a journey to Palestine. Tuchler wanted to show the Nazis that the so-called solution of the Jewish question should be the German Jews’ emigration to Palestine. In Palestine von Mildenstein met Ben Gurion and was full of admiration for the Jewish activities there. Back in Germany von Mildenstein wrote some articles in the Nazi journal 'Angriff' in order to convince the Germans of his emigration idea, but he failed. Tragically, von Mildenstein recruted Adolf Eichmann for the government department which had to deal with the 'solution of the Jewish question'. Von Mildenstein himself had to leave this department after a dispute with Reinhard Heydrich, one of the organisers of the Shoah. This rare medal commemorates von Mildenberg’s action little known today.