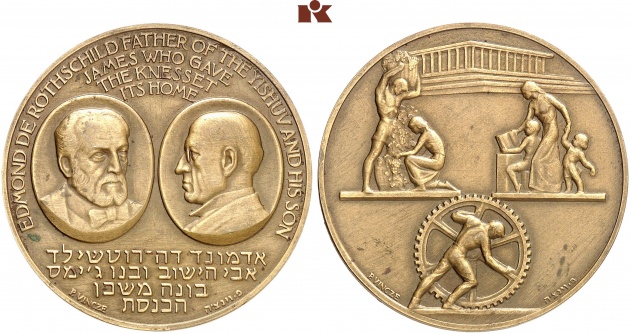 Estimated price: 100.00 €
Hammer-price / sale price: 80.00 €
Bronze medal, 1966, signed by P. Vincze, commemorating Edmond and James de Rothschild. Two medallions with their busts facing each other, EDMOND DE ROTHSCHILD FATHER OF THE YISHUV AND HIS SON / JAMES WHO GAVE / THE KNESSET / ITS HOME, the same text also in Hebrew. P VINCZE //View of the Knesset, beneath it three scenes which symbolise agriculture, education and technical producition. Signature of P. VINCZE in Latin and Hebrew characters. Edge lettering in Latin and Hebrew STATE OF ISRAEL AVG 1966, Menorah. 59,00 mm; 76,92 g.

Baron Edmond de Rothschild, 1845-1934, was a member of the French Rothschild family. He was a very active philanthropist and patron who particularly supported the Jews in Palestine by purchasing vast areas of land and bestowing them upon Jewish settlers. Also his son James and his daughter-in-law promoted the Zionist movement. James de Rothschild granted large sums for the construction of the Knesset, i.e. the house of Parliament in Jerusalem.