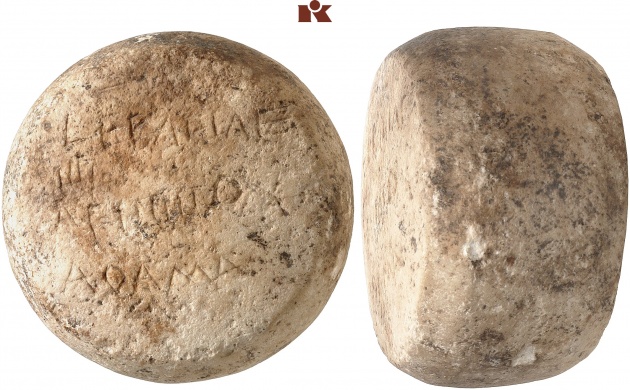 Prima facie, it is unclear, whether the king mentioned in this inscription is Agrippa I or Agrippa II. The lack of Agrippa I’s title 'megas’ may be used as an argument for the identification of the king, after whose reign the weight is dated, with Agrippa II. The name of the owner of this weight, Athamas, is of great interest: Athamas is a very rare Greek mythological name, but it is highly improbable to find a bearer of this name, which falls back to a Boiotian and Thessalian hero, in Judaea. Also the use of the wrong genitive form Athama instead of Athamantos (cf. W. Pape – G. Benseler, Wörterbuch der griechischen Eigennamen I, A-K, Braunschweig 1911, 23) shows that we are not dealing with a Greek living in Judaea but with a Jew. Agrippa II’s realm mainly comprised of territories with a mixed population, where Greek was used as a common language (cf. the language used for the inscription) and where many Jews tried to become integrated in the existing society while maintaining their religious and cultural identity as far as possible. This endeavour is reflected by the names given to Jewish children in this area or generally in the diaspora. Quite often Jewish parents gave their children Greek names which could be understood as translations of Hebrew names (e.g. Salome = Eirene, Theodoros = Nathanael, Gelasios = Itzhak), as allusions to them (Leontios = Juda) or homonyms of Hebrew names (Jason = Joshua). Athamas, the name inscribed into the weight, belongs to the last category: It is the hellenised form of the Jewish name Adam; cf. e.g. J. Mélèze-Modrzejewski, Les tourments de Paul de Tarse, in: Symposion 1988. Vorträge zur griechischen und hellenistischen Rechtsgeschichte (Siena – Pisa, 6.-8. Juni 1988), Köln/Wien 1990, 320 f. In coming to a conclusion, this weight bears witness to both the situation in Agrippa II's kingdom and the Jews’ difficult life in the diaspora.