THE SAMEL COLLECTION OF ANCIENT JEWISH COINS
COINS OF THE ROMAN EMPIRE REFERRING TO JUDAEA, Vespasian, 69-79. Struck in the name of Domitian. 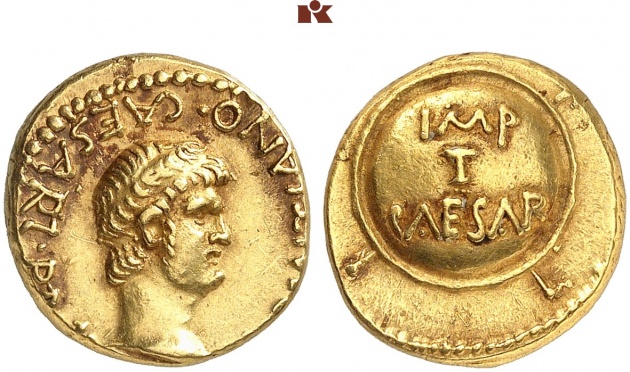 
The only specimen published to date. The obv. slightly struck off the centre, graffiti, nearly extremely fine

This coin was produced by a moving mint which accompanied Titus on his journey through the most important cities of the Levant. We know from the Jewish historian Josephus that Titus, having captured Jerusalem, travelled from Judaea to Antioch. The son of Vespasian escorted by two legions wanted to be celebrated as a victor and to discourage the Jewish people in the Near East cities from a new uprising against Rome. On October the 24th 70 he celebrated his brother’s birthday in Caesarea Maritima. On this occasion 2,500 Jewish prisoners of war were slaughtered in the city’s amphitheatre (or hippodrome). Obviously, during these festivities, such gold coins were produced in relatively low numbers and presented to Caesarea’s most important dignitaries. A similar coin with the same rev. was minted for the birthday celebrations in honour of Titus’s father Vespasian. They took place in Berytos/Beirut on the 17th of November 70. It is obvious that these memorial coins were minted from the gold which the Romans plundered from the sacred treasure of the Temple in Jerusalem. We can learn from the two graffiti that the recipient scratched an N into the coin’s rev. which may be understood as the initial letter of his name or that of the Greek word,nike‘ which means victory. A short time later this man used the memorial coin for payment purposes. It came into the hands of a Jew who could not refrain from scratching the graffito "death" or "die!" in Hebrew letters on both sides of Domitian’s portrait. This coin is a historical document of the utmost importance.