The sad fate of Wilhelmine Amalia

Wilhelmine Amalia was born on April 21st, 1673 as the daughter of John Frederick, Duke of Brunswick-Calenberg. Thus, she was the offspring of one of the most important dynasties of the German Empire. Brunswick was ruled by several branches of the House of Welf, and its rich silver mines made the duchy an important factor in European politics. The House of Welf was traditionally protestant, until that very John Frederick, third-born son of George, Duke of Brunswick-Calenberg, had converted to Catholicism in Assisi on one of the customary educational trips to Italy. 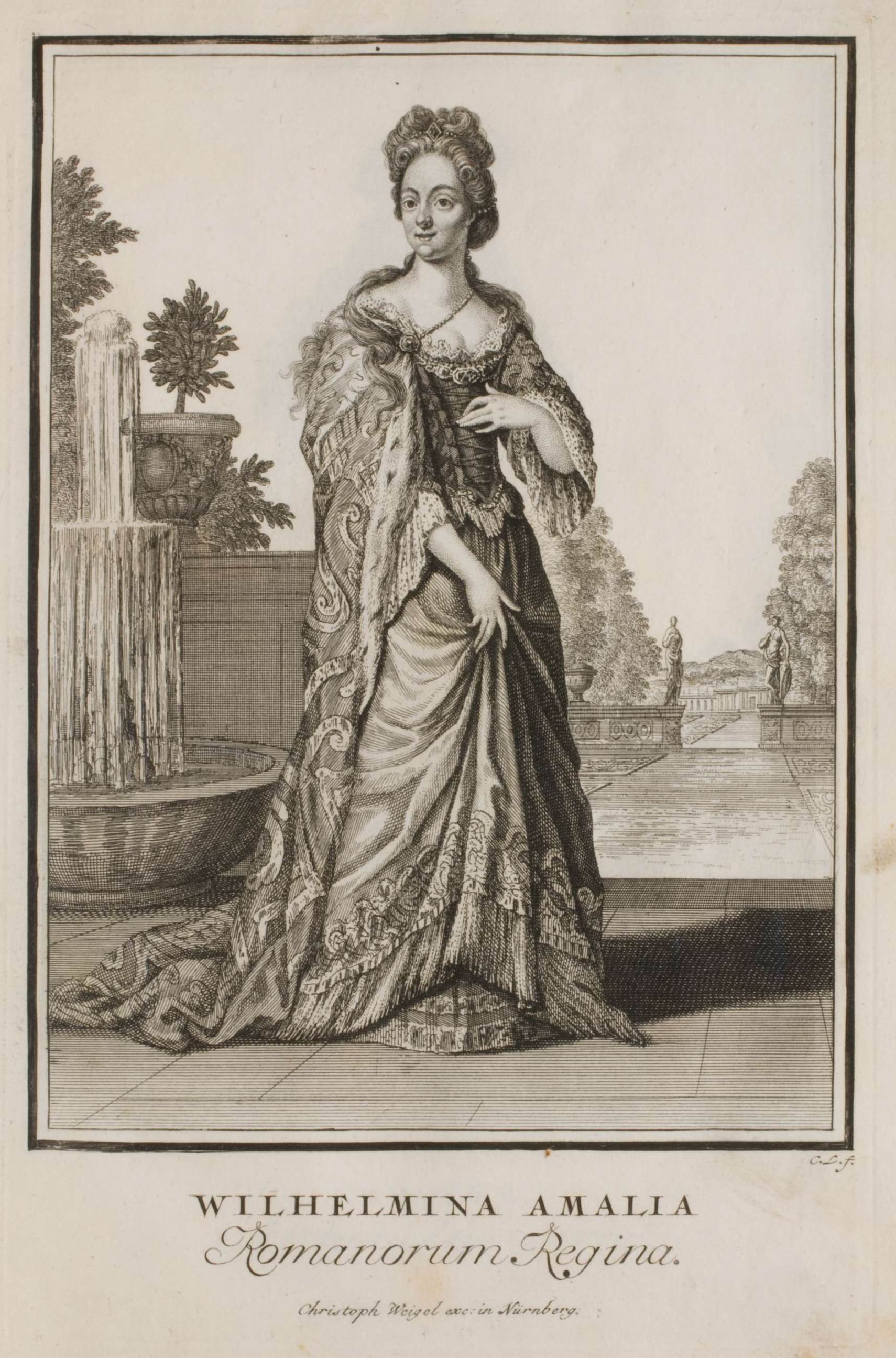 After that, the situation was a different one. Now, John Frederick’s daughters were suitable wives for the Catholic dynasties as well. After his early death in 1679, the mother took the girls to the Cistercian convent of Maubuisson, where her sister was the abbess. On the occasion of their older sister’s marriage, they both returned to the Hanover court in 1694. 21-year-old Wilhelmine Amalia charmed the courtly society with her great beauty and her devout and solemn nature. Soon, all of Europe was speaking of her. 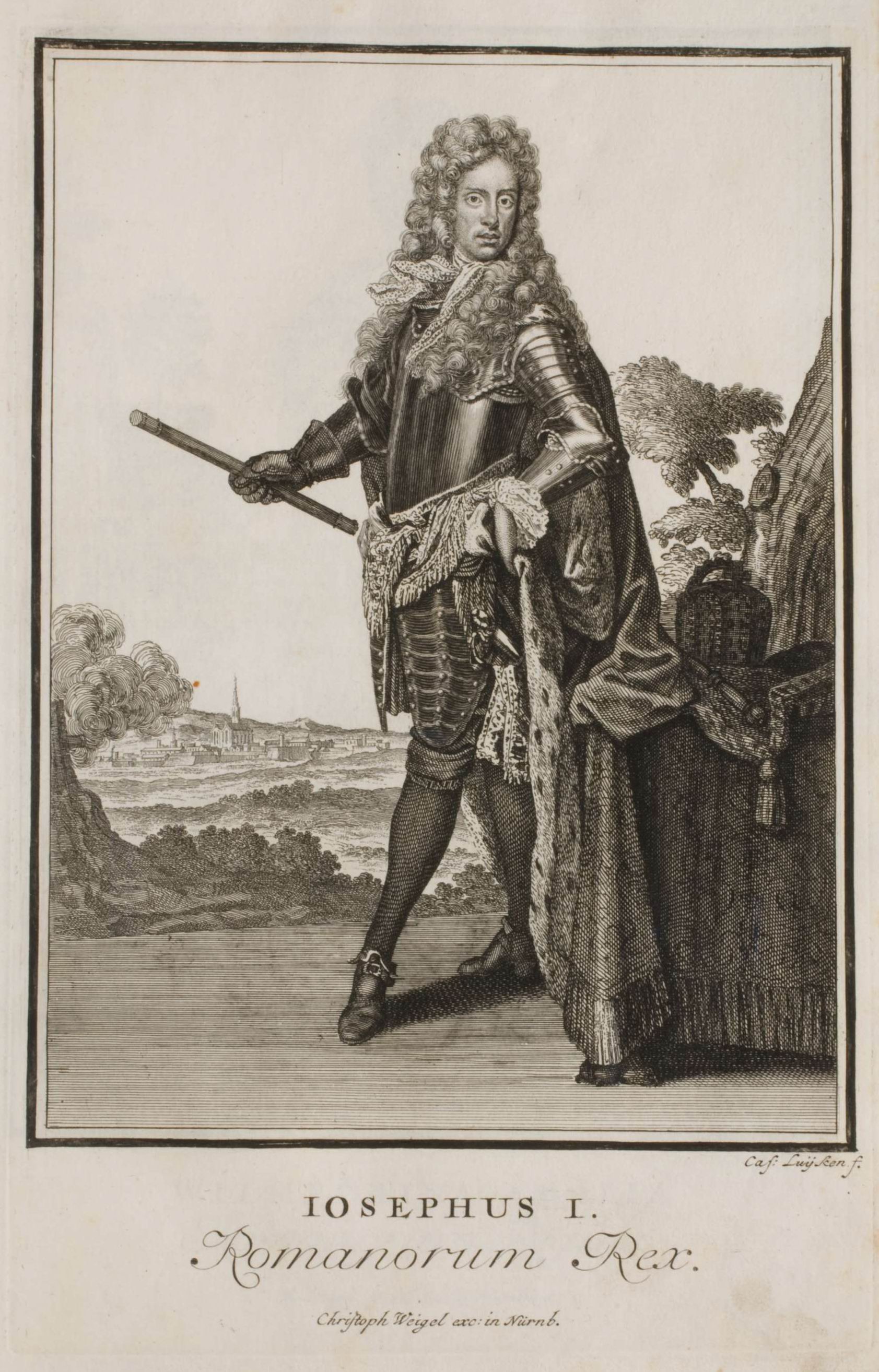 Joseph I. Copperplate engraving from 1703.

Naturally, news of the beautiful Welf daughter also reached Vienna. She was attractive in two ways: First, via her, one could finally strengthen the diplomatically important ties with the House of Welf. After all, they were candidates for the English throne, which would mean a liaison with Great Britain on top. What’s more, Wilhelmine Amalia seemed highly suitable for finally taming the much-too-passionate crown prince. He was good-looking, with his blond hair and blue eyes and without the protruding Habsburg Lip. Alas, he liked women a bit too much. Rumor had it that, as young as 15, he already had three affairs simultaneously.

Joseph I and Wilhelmine Amalia got engaged on November 22nd, 1698 and married on February 24th, 1699. In the same year, their first daughter was born, followed one year later by a successor to the throne, who unfortunately died after only a few months. In 1701, Maria Amalia was born, the third and last child.

For Wilhelmine Amalia became sterile due to abdominal ulcers. She likely owed those to her husband Joseph I, who infected her with one of the at the time widespread venereal diseases. Thus, Wilhelmine Amalia lost her status of beloved wife and turned into a spouse who had to accept her husband’s numerous mistresses. 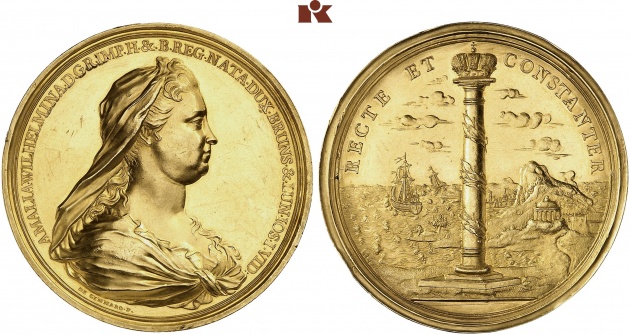 In this personally certainly quite painful situation, the medal’s back-side image was created, which was taken up again for the young widow Wilhelmine Amalia. It tells of the young empress’ grief, but also of her sense of duty.

The motto was “recte et constanter”, which means “uprightly and firmly”. Everyone who was familiar with the at the time very popular art of emblematics saw at first glance that the representation emphasized this motto.

In the encyclopedia of emblematics, the back-side motif, a column on a wide base, is interpreted as follows: “Like the high column becomes all the more solid by an added weight if it is built on a wide base, it is fitting for the high spirits living in a noble body not to seek to escape from the weight of the reign, but instead to do the utmost to prevent the whole building from collapsing, should the column at one point perhaps begin to sway.”

The connection of crown and column implies another aspect: “A column sustains itself in its own weight. Yet, should it tilt to one side, it must fall, and the heavier it is, the quicker it falls. It is the same with the empires. … Therefore, where the crown does not remain stable on top of the unswerving column of eminence, the empire will soon collapse.”

In other words, with this presentation, Wilhelmine Amalia let the court know that she was ready to take on her responsibility, despite her personally unsatisfying situation.

But let us take another close look: In the background of the column, there are two ships at high sea, sailing independently. Probably a symbol for the estranging spouses. Could the temple be meant as a sign of hope? After all, in emblematics, the temple represented matrimonial harmony which could be achieved through mutual forgiveness.

If that was the case, Wilhelmine Amalia’s hopes were disappointed. During the six years Joseph I got on the emperor’s throne, he would not return to her, but kept mistresses, to the last of whom he bequeathed jewelry and clothing worth 500,000 florins. For comparison: His mother Eleonor received only 50,000 florins.

So, at the age of 38, Wilhelmine Amalia was a widow. A widow whose sterility was known to half of Europe. Another marriage was therefore out of the question, as was a reign. Wilhelmine Amalia and her daughters were pushed aside and Charles VI, Joseph I’s brother, became his successor.

An official medal was issued once more for Wilhelmine Amalia, repeating the motif of the medal created on the occasion of her coronation. Responsible for the design was Antonio Maria de Gennaro, called to the Vienna mint by Charles VI. What might Wilhelmine Amalia have felt, being reminded by this back-side motif that she had promised, at her coronation, to act “uprightly and firmly” for the benefit of the empire – and not for her own? 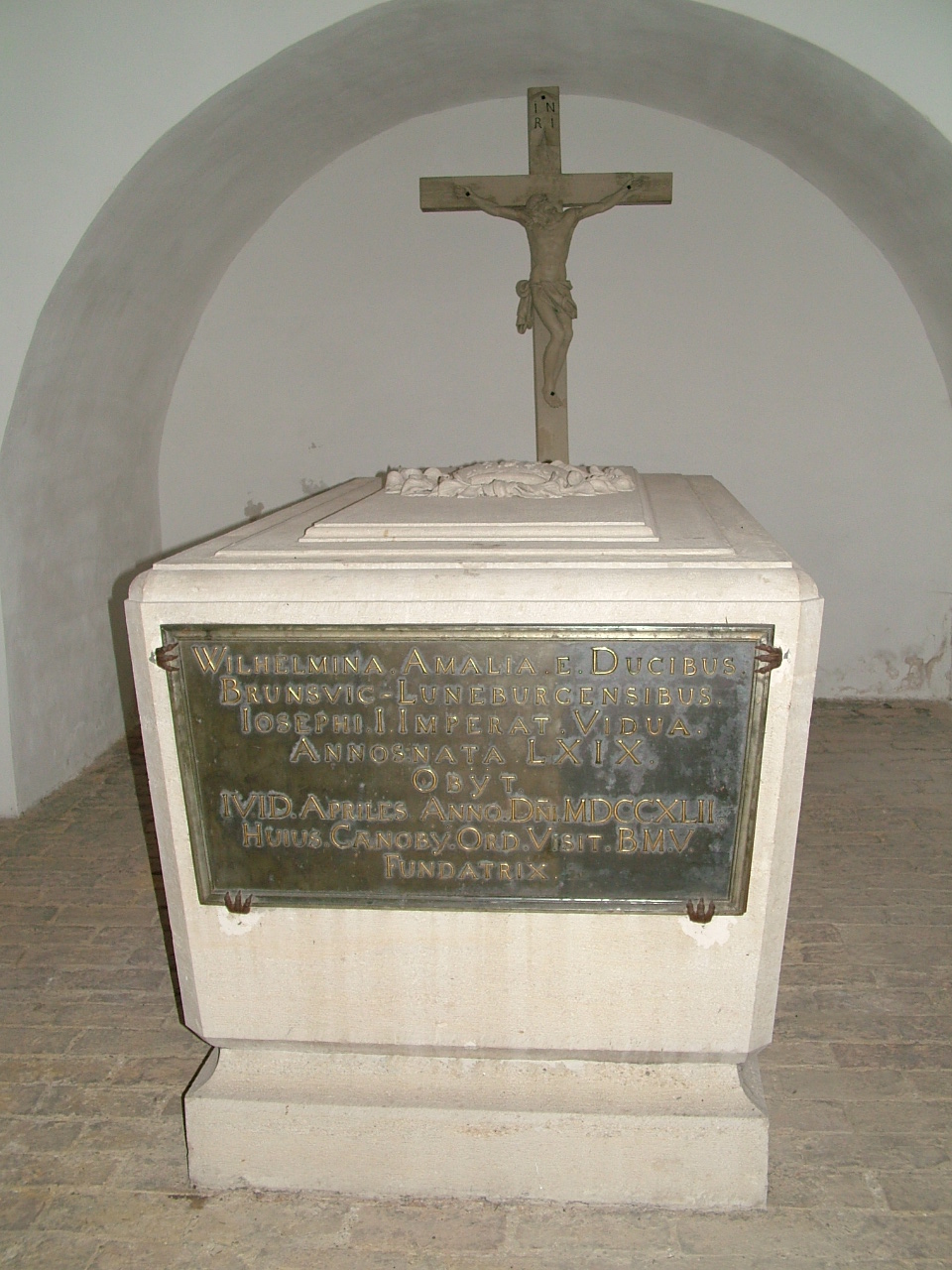 Wilhelmine Amalia and her daughters were accommodated at Schönbrunn Palace. Not until long after Charles had the girls married for the (supposed) benefit of the empire did the former empress retire to the Salesian convent she had founded herself, where she would die at the age of 69. Her body was buried in that convent. Her heart, however, lies at the feet of her unfaithful husband in the Capuchin Crypt.