Arabic coin history begins with the imitation of Byzantine and Sasanid types, as the conquerors of the areas previously ruled by Byzantium had possessed no coinage of their own up to the time of Mohammed. In addition to the quite freely improvised interpretations of their coin models, the ruling Caliphs were also depicted on the Arabic mintings. 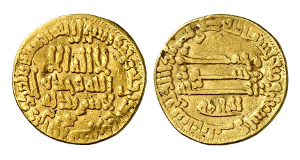 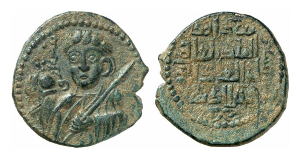 Due to the Islamic ban on images, oriental coins from the time of the Umayyads show, as a rule, only inscriptions in a precisely established series of Koran verses and (beginning in 786 / 787 on the silver coins) the Caliph. The minting year is given in the Islamic calendar dates based on the year of the Hejira (AH or “Anno Hegirae” = July 16th, 622), that is, the flight of the Prophet Mohammed from Mecca to Medina. 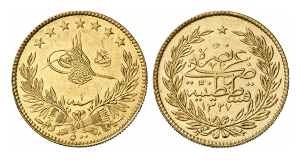 Based on the Islamic calculation of “moon years” with 336 days, the corresponding Christian year can best be calculated according to the formula (AH – 3.03%) + 622 = AD. Because of this extensive information, Islamic coins are an outstanding means of dating in archaeological connections and offer important historical testimony. With the splintering of the Arabic Empire into various parallel ruling dynasties in the 9th and 10th centuries, a number of possible collection areas occur from the Middle Ages until well into the modern era, and from Europe to north Africa to Asia. In this respect one need only think of the oriental coins from the Hafsid Empire in Tunisia (1229-1574), the Caliphate of Córdoba (929-1031), and the Ottoman Empire (from ca. 1299-1923), as well as the Mongols, Seljuks and Zengids.

The oriental coin category also includes the coinage from the important Kushan Empire in central Asia and northern India from the 1st-3rd centuries A.D. The successors to the Indo-Greeks and Indo-Scythians developed, among other things, an extensive gold coinage which today still bears testimony to the wealth of their rulers. From the time of King Vima Kadphises (around 90-100) at the latest, the unified oriental coin image of the Kushan mintings is easily recognized: on the front side one finds the standing ruler shown beside a smoking altar, while on the reverse the image of a divinity, usually Iranian, is seen. Aside from the gold mintings (stater) there are also bronze and copper coins (the aes and drachma) for daily transactions.

If the exotic inscription of the oriental coin should deter the beginner at first, nonetheless collection successes are fairly quickly to be achieved with a little practice in use of the often well-illustrated literature, due to the high level of organization in oriental minting,

Take the plunge into the fascinating world of oriental coinage!