You are here: Collection areas Russian coins and medals

Russian coin history is still relatively young. The development of Russian coins cannot be traced back directly to ancient or medieval prototypes, but rather unfolded in an astoundingly short time in an abundance and splendor which, with its impressive coin- and medal images and its large-sized gold and silver mintings, can quickly put the collector under its fascinating spell. 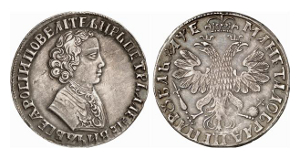 While many world currencies -- such as the American dollar -- derived their names from the silver taler, which had been minted since the end of the 15th century, Russia took a different numismatic path with its currency: the rubel, introduced under Tsar Peter I “the Great” (1682-1725), took its name from the old Russian word for “to strike” (rubit). This old-fashioned term for Russian coins goes back to a time in which pieces were still cut from massive metal ingots in order to produce smaller means of payment. This quaint terminology for coins stands in stark contrast to the fact that the Russian coin system was the first decimally designed, modern currency system in the world (1 rubel = 100 kopeks) and that its structure still remains in effect after more than 300 years. 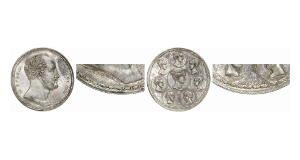 Although the fundamental structure of the denomination was quite simple, the necessity of supplying a gigantic empire with money led to the emergence of a great number of various types and coin images, which make the collecting of Russian coins a passion which is highly stimulating in its rich variety. In Russian coin and medal images the great rulers of Russia reappear before our eyes and bring Russian history, in the truest sense of the term, close enough to touch.

Aside from normal coins of currency, diverse renowned personalities and significant events in Russian history are preserved and recorded in medal images: from the Russian naval fleet expeditions of the 18th century, to the battles against Frederick II of Prussia and Napoleon, to the imposing and impressive structures of the Industrial Age. 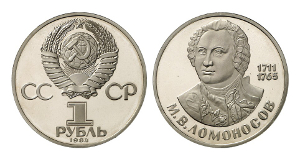 Numerous new publications in a number of languages, with extensive pictorial material, make it simple even for beginners with no knowledge of the Cyrillic alphabet to quickly immerse themselves in Russian coin and medal history, and to take home a piece of Russia “stamped out of history”.