In ancient Greece the central course for the development of European civilization was set. In addition to the development of Attic democracy, the cultural achievements of the “classical period” (ca. 500-363 / 323 BC) include monumental structures (Acropolis), important historical works (Herodotus) and major sporting events whose influence reach into modern times (Olympic Games). 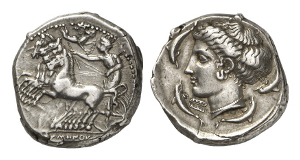 The invention of the coin, as a convenient means of payment consisting of precious metal guaranteed by the state, took place (according to the Greek historian Herodotus) around 650 BC in Asia Minor among the Lydians. The early bulbous mintings, initially embossed with simple coin images, were made of electrum, a natural alloy of gold and silver. It was, however, primarily thanks to the entrepreneurial spirit of Greek traders that minting spread throughout the Mediterranean world during the 6th century. The first Greek silver coins emerged on the island of Aegina with the image of a sea turtle, the symbol of the sea god Poseidon. In fact, Greek coins in general show the symbol of the divinity of the respective city-state, or an image with a local mythological connection: the owl for Athens, Pegasus for Corinth, the labyrinth for Crete or the bee for Ephesus. The Greek coin images of well-known punchcutters such as Cimon, Eucleidas or Euenetus of Syracuse are sometimes of outstanding quality and seductive naturalism – true “miniature works of art” of the ancient world, encapsulated in the format of a precious Greek coin. 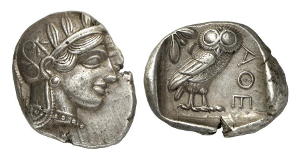 The Greek terms for the coins denoted units of both weight- and value calculation. Because of the diversity of the Greek city-states, a drachma could have correspondingly different weights. The most widespread in Greece was the Attic drachma at around 4 grams. As early as 593 BC there is said to have been a coinage reform in Athens with which the statesman Solon introduced the tetradrachma (equal to four drachmas). The multiple pieces (multipla) of the drachma are, by the same token, called didrachma (= 2 drachmas), pentadrachma (= 5 drachmas), and oktodrachma (= 8 drachmas).

Under Alexander the Great (336-323 BC) Greek coinage was systematized and unified, in order to meet the requirements of a vast empire. Macedonian coins from the time of Hellenism (336-30 BC) show the head of a young Hercules with his lion’s skin. Alexander‘s successors (in the “Diadochi states”) initially continued the coinage unchanged, before eventually producing their own image designs and the first heads of rulers on Greek coins. 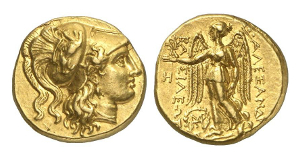 The expansion of the Roman Empire brought an end to independent Greek minting. In 146 BC, Greece became a Roman province (Macedonia). In place of local Greek images of divinities and rulers, portraits of the Emperor became the rule, and Greek coins made way for Roman provincial coinage.

Take home a souvenir from the birthplace of European culture with a collection of coins from ancient Greece!