With a population of more than 1 billion, China is today the most heavily-populated country on Earth and has a history of well over 2,000 years. The use of money, too, can be documented as far back as the Neolithic period – at that time, however, still in the form of the shells of the cowry (“primitive money”). Thereafter, a phase of “utensil money” followed with bronze currency in the form of knives (bu) or spades (dao). 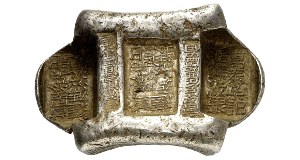 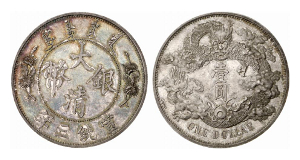 In 211 BC the Emperor Qin Shi Huangdi (247-210 BC) is said to have introduced the first round coins with a square hole in the middle (“cash”). During the Han dynasty (206 BC until 220 AD) the value of Chinese coins was decoupled from the country’s precious metals and a denominational system was introduced. The currency requirements of the huge empire must have been tremendous. Under the Song Emperors alone, 200 billion Chinese copper coins are said to have been minted. With paper money, too, the Chinese were well ahead of the Europeans: as early as 1024 in China the first banknotes in the world were issued, covered by imperial gold and silver. However in 1644 the printing of paper money was discontinued again, following numerous monetary devaluations.

In the 17th century, in addition to the traditional Chinese copper, a silver currency based on the tael (37.78 g), divided into 10 mace (= 100 kandarin = 1,000 li), was established. The yuan, still in use today, was first introduced in 1889. The overthrow of the Emperor and the establishment of the Republic of China were closely followed by the conversion of the currency to the silver dollar. 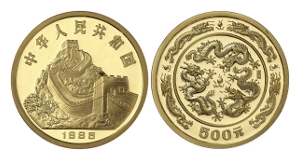 Since the assumption of power by the Communist Party after the Second World War the People’s Bank of China (PBoC) has administered the nation’s mint- and currency policy.
In addition to Chinese circulation coins for daily payment transactions, China issues today with the “panda” one of the most popular gold bullion coins worldwide in various denominations and precious metals, with motifs which change each year.

Due to the coin images stating the ruler’s name, face value, and province, hardly changed since the time of the emperors, a bit of practice enables one to identify even the older Chinese copper coins from the representations fairly easily. Also attractive are the silver dollar mintings issued by China since the 19th century for the simplification of international trade, with their western-influenced motifs. One need only think of the “auto dollar” minted in 1928 on the occasion of the opening of the first paved roads for automobiles in Kweichow province.

Start your own collection of Chinese coins, featuring one of the oldest coin histories, and begin your numismatic journey into the “Middle Kingdom” (Zhōngguó)!