Medals and Badges of Honor

As early as the time of the ancient Greeks, medals and badges of honor were awarded for military services, in the form of small metal discs or half-moons. The Romans adopted this custom for their army and called these decorations “phalera”, a play on the similar-sounding Greek “tá fálára”. From this Latin word, as well, we derive the term for the scientific expression “Ordenskunde” (German) or “phaleristics”. 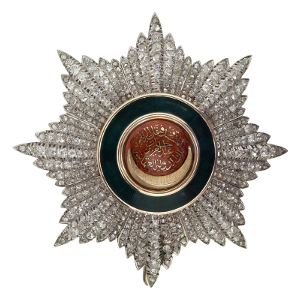 The Romans were already decorating their medals and badges of honor with pictorial representations such as portraits of gods or fabulous beings. Modern medals and badges of honor, however, have their roots less in the ancient world than in the system of awards from the Middle Ages. Following the First Crusade a religious order of knights, intended to guarantee the safety of Christian pilgrims on their way to holy sites of Christianity, was founded in Palestine.

The members of orders such as the Knights Templar (founded 1118), the Order of St. John (founded 1099) or the Teutonic Order (founded around 1190) were required to obey certain rules (“ordo”) and wore, as a visible sign of membership, an insignia on their clothing.

From these symbols, in combination with an established code of behavior and a membership hierarchy, the modern systems of awards arose. In the late Middle Ages – and particularly in the context of the Hundred Years’ War – secular orders of Knighthood joined together with the religious associations. Famous non-clerical orders of the late Middle Ages include the English “Most Noble Order of the Garter” (founded 1348) and the Burgundian Order of the Golden Fleece (founded 1430).

In the 17th century, the absolutist system of awards was detached from its origins in the fraternal groupings which were the old knighthood orders, and standard awards were created, above all for military service. Initially these were medals for service and bravery, conceived only for noble officers. Later, and primarily as a result of the wars of revolution at the beginning of the 19th century, medals of honor for “commoner” under-officers, teams and non-military services were instituted. Thus phaleristics offers today’s collector a broad spectrum of civil and military medals, badges of honor and commendations from nearly every nation on earth.

In this connection, rarity and preservation are not the only important criteria for the pricing of medals and badges of honor. The original award certificate or additional information (for example, letters and photos) regarding the original recipient can sometimes have a substantial bearing on the hammer price at the auction block. Whether one seeks out his collection items in medals and badges of honor according to historical, geographic or personal aspects, a certain expertise is essential in every case, for which reason beginners in this area should consult a specialist.

Immerse yourself in the world of medals and begin your collection of civil and military awards of recognition today.