You are here: Collection areas Coin Scales and Weights

Long before coins had an embossed and guaranteed value (face value), it was above all the precious metal content which was decisive regarding their buying power. Thus the coin scale was for centuries the constant companion of the merchant and the moneychanger. Many denomination-related terms such as shekel (“the weighed”) and dupondius (“two pounds”) are derived from weights. 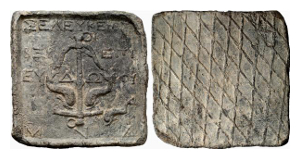 Specially-produced coin scales were used in all periods for the examination of coins for their full weight and authenticity. In the Middle Ages it was primarily light, collapsible scales which served for the weighing of coins and precious metals (“hack-silver”), as the assortment of minted types was nearly incalculable. Beginning in the 16 century, coin scale sets consisting of scale beams, scale dishes and weights were stored in easily transportable and decorative wooden boxes. The accompanying weights were not indexed to a defined unit of measurement such as grams or ounces, but rather to the corresponding coin denomination: ducat, taler or noble. The selection of the coin type to be weighed with the coin scales was made either through the written indication on the weight (e.g., 1 LsDOR = 1 louis d’or or 1 GOLD GULD = 1 gold gulden) or via the image embossed on the coin. In order to distinguish them from the original currencies, the weights with the coin scales were usually rectangular and made of brass. 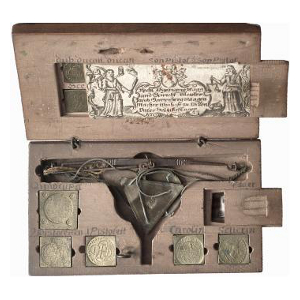 In Germany, most coin scales of the 16th-18th centuries came from Nuremberg or Cologne and were true “export hits” of these cities. Beginning in the 18th century in the Bergisches Land (“mountainous country”) region a further center of German scale production emerged, and whole families of artisans were active in their manufacture in Barmen, Radevormwald, Lennep and Solingen for more than half a century. In the greater European sphere, coin scales were also produced in large numbers in the trade centers of Amsterdam, Paris, Milan and Venice. Small “fast scales” were already in general use during the German Empire period for the inspection of 5-, 10- and 20-gold-mark pieces (patented gold coin scales), including those by well-known companies such as “A. Schimmel” of Leipzig and “Alex Bernstein & Co.” of Berlin. From the end of the 19th century, however, the gold coin – and thus also the coin scale – lost their significance in payment transactions.

The finely-detailed scales and their ornately-embellished wooden cases bearing information on the manufacturer are today collectors’ objects, just as desirable as the coins for whose inspection they were originally manufactured. In addition to the coin scales, related measurement instruments such as precious metal- (with grain weights), apothecary- (with weights of grain, drachm and scruples) and diamond scales (with weights in carats), or individual weight sets can be included in the collection. 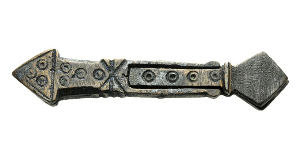 Experience the fascinating world of scales and weights from a time which, as yet, had no unified measurement-, coin- and weight system.