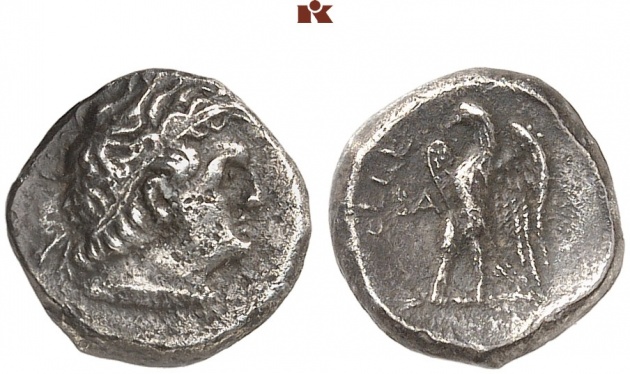 
Extremely rare, so that exactly this coin is referred to in the relevant literature. Broad flan, nicely centered, very fine

Overbeck – Meshorer no. 5 and 23 with enlarged photo = Lorber, Ptolemaic Empire I 388 no. 712 ("This unique coin is of exceptionally fine style for the Judah series. The dies were probably commissioned from outside the mint. The idealized portrait of Ptolemy I reflects changes to his iconography at all mint s following the reform of 261/0."); Meshorer, Treasury 200 no. 31 an plate 4 with enlarged photo of this coin. Solely due to its weight this coin forms an exception from the other coins issued by the Ptolemies: For the character of this coinage cf. Hendin, Jewish Coinage, 124: "The Yehud coins ... of the Ptolemaic period are local mint Ptolemaic issues. All of the coins of the Yehud series are fractional units, mostly lighter than one gram, and there is not a single full unit coin (shekel or stater) known to exist".