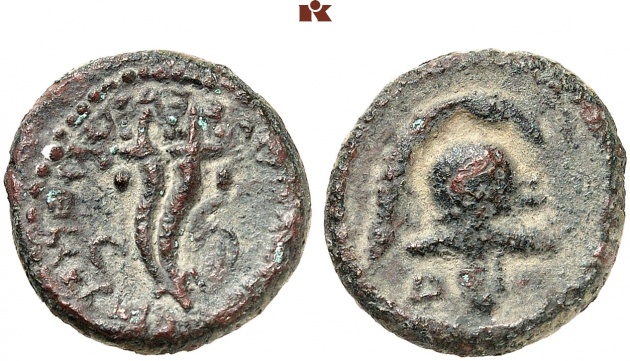 
An extremely rare coin in an extraordinary beautiful state of preservation. Fine/very fine

Cf. Meshorer, Treasury 36, where he characterised the helmet as a symbol of leadership and authority and asked the question whether it had to do with John’s new title of R’Š ḤḆR HYHWDYM. Ch.-G. Schwentzel, Images du pouvoir et fonctions des souverains Hasmonéens, Revue Biblique 2009, 368-386, esp. 371 f. may be right, when he underlines that the helmet should be interpreted as a reference to the modern hellenistic weaponry of John’s Jewish army and to the king’s successful expansion that made him into a new David whose identification mark was the helmet. We may assume that this coin is a 'historical coin' minted for a specific event in John’s life.