On 2 February 2017, the auction house Künker will hold its traditional Berlin Auction in conjunction with the World Money Fair. It’s going to be a demanding day, as the schedule is really tight. 713 exquisite German and world coins and medals are offered in Catalog 285. The focus is placed on the Nordic countries, the U.S., Russia, the Holy Roman Empire, and Saxony. Catalog 286 will be next, with the Ottar Ertzeid Collection comprising coins from the Swedish Possessions. The first part of this auction featuring 250 lots will be hold in Berlin. The second part will be auctioned off on the internet, as an eLive Premium Auction, on 7 February, starting on 6 pm. This is rounded up by another eLive Premium Auction offering the Toni Barth Collection with German coins since 1871 of a quality rarely encountered. They will be sold on 8 February, starting on 6 pm. Both auctions will take place on www.eLive-Auction.com.

Auction 285: Numismatic Rarities from all over the World | Russian Coins and Medals 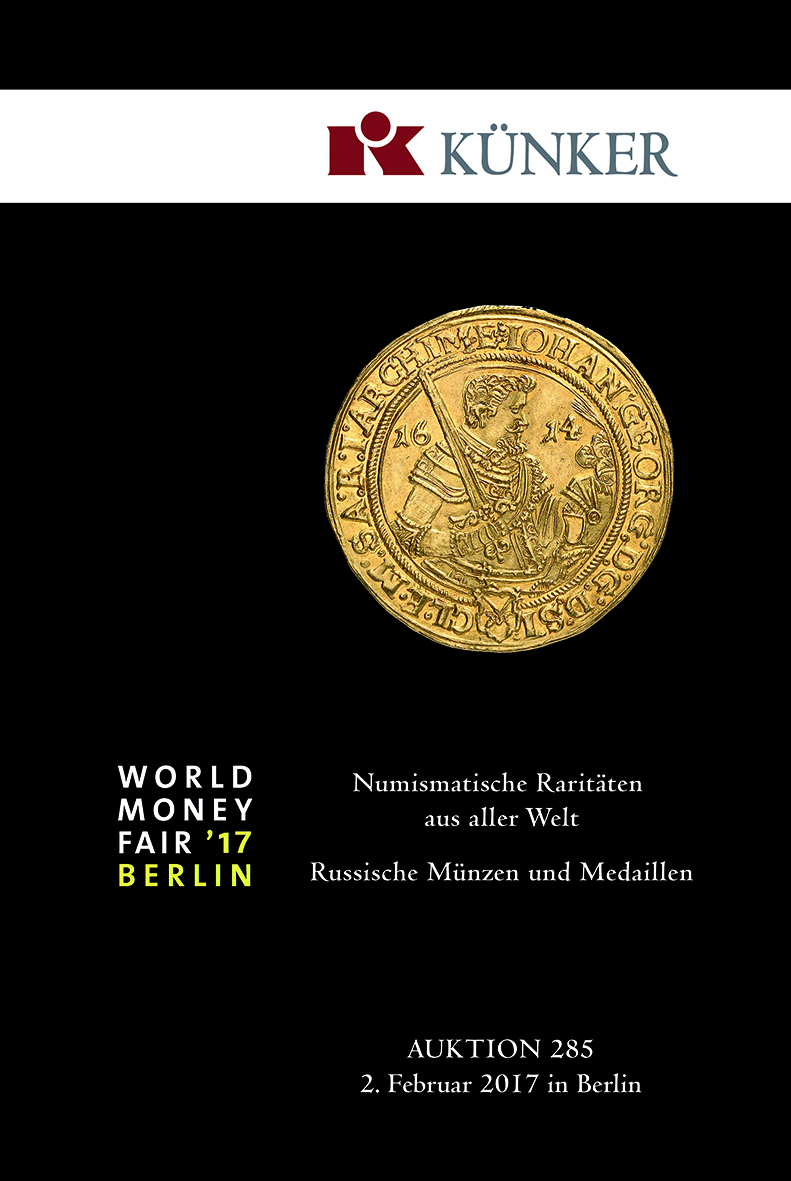 Deciding on which highlights from Auction 285 should be emphasized is a difficult thing to do because, as every year, the Berlin Auction is full of rarities from every part of the world. From the Netherlands, for example, only 16 lots are listed but these include a unique 1807 gulden, minted in Utrecht, during the short reign of Napoleon’s brother Louis. Graded almost FDC, this first strike is estimated at 60,000 euros.

Or take the example of Switzerland which is represented by “only” a dozen lots. Among them you find, for instance, a pattern for the Bern konkordatstaler from 1826 in silver of which only 75 specimens were struck (estimate: 15,000 euros), a Lucerne double duplone from the Helvetic Republic dating from 1796 (estimate: 12,500 euros), the superb gold medal of 20 ducats with the magnificent depiction of Schaffhausen and the Rhine Falls (estimate: 50,000 euros), a double duplone from the Helvetic Republic from 1800 (estimate: 10,000 euros) as well as the coveted vreneli of 100 francs from 1925 (estimate: 12,500 euros).

No matter which area you are collecting, you are highly likely to find a rarity in Auction 285. This applies in particular to the early gold coins from the United States of America. Whether “capped bust” right or “capped bust” left, whether “Indian princess”, “classic head”, “liberty”, or “Indian head” – you can find all early types that even include an 1879 trial strike for the extremely rare 4 dollar “Stella, flowing hair” (estimate: 40,000 euros).

As regards the U.S. section, the unchallenged highlight is a Congressional Gold Medal, one of the two highest civilian honors bestowed by the United States of America. It was first awarded to George Washington in 1776. Among the recipients of this high honor were also Orville and Wilbur Wright, Charles Lindbergh, Thomas Alpha Edison, and Walt Disney. The specimen offered at Künker’s was awarded to Alexander Macomb who, together with his 1,500 soldiers and some militias, successfully put up resistance to English General George Prevost and his 10,531 men near Plattsburgh in the Second War of American Independence, thus contributing to the American victory significantly. This unique object of utmost historical importance is estimated at 150,000 euros.

Pre-1871 Germany has a lot to offer, too. It starts with some spectacular lösers as a löser of 8 reichtstalers from the House of Welf, minted in Clausthal in 1654. Probably unique, the specimen features a jumping Saxon Steed above the cityscape of Celle (estimate: 100,000 euros). Numerous coins are connected to the Reformation period featuring contemporary coins, as a 1545 double taler on the capture of Duke Heinrich of Brunswick, issued by the Schmalkadic League (estimate: 10,000 euros) as well as coins and medals dedicated to reformation jubilees, as a thick double reichstaler of the city of Magdeburg bearing the portraits of Hus and Luther, issued in 1617 (estimate: 35,000 euros).

The lion share of pre-1871 German coins comes from Saxony and includes – which is hardly surprising – a large number of important rarities, for example a 5 ducat piece in the tradition of the portugalösers, which was minted in Dresden in 1614 (estimate: 50,000 euros) or a triple ducat of August the Strong from 1721 (estimate: 40,000 euros).

And this takes us to Russia where we finally discover the coin with the highest estimate of the auction: a 1707 rouble of Peter the Great from the Hutten-Czapski Collection, struck by the Moscow Kadashevsky Mint (estimate: 250,000 euros). This is just one out of many rare specimens. To mention only a few examples: a ducat 1752 of Tsarina Elizabeth, minted at the Moscow Red Mint in 1752 (estimate: 50,000 euros), and a perfect quintuple rouble of Peter III from St. Petersburg from 1762 (estimate: 30,000 euros).

Auction 286: The Ottar Ertzeid Collection: Coins from the Swedish Possessions 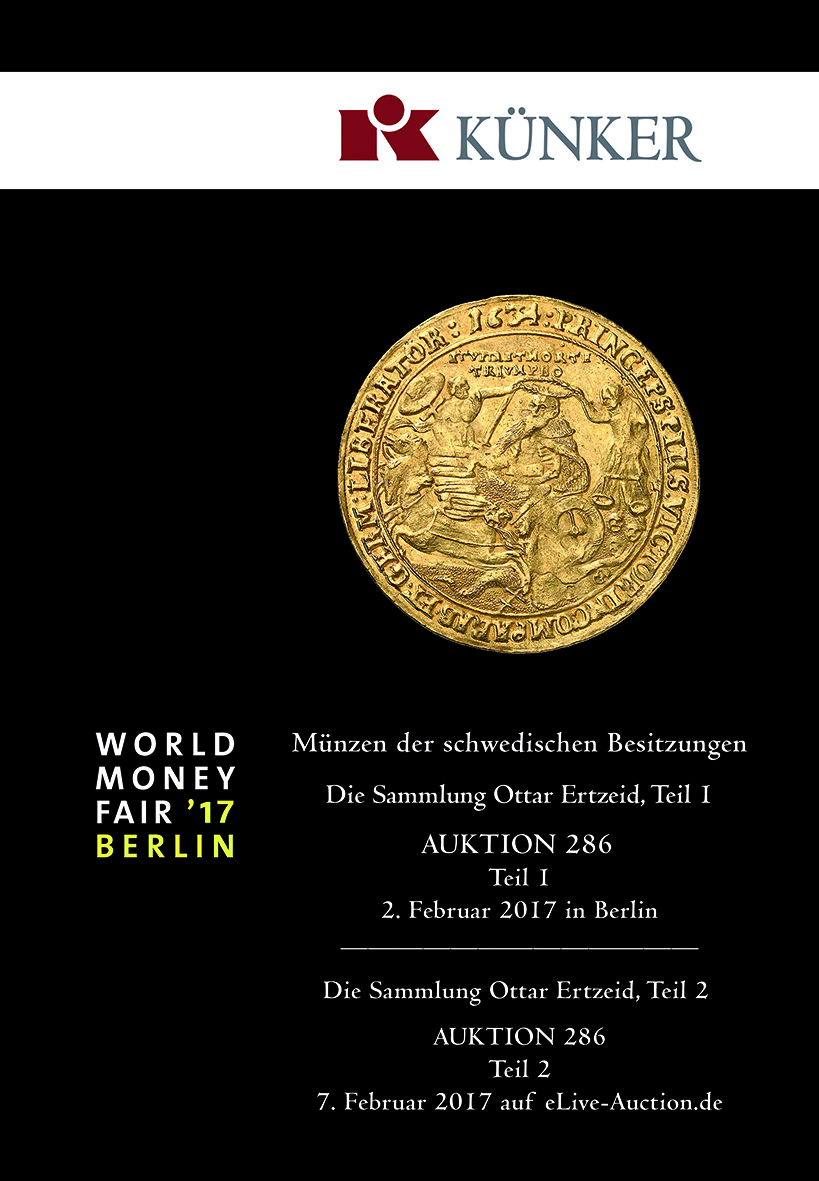 And whoever thinks that this was it may better brace himself for the next 250 coins stemming from the Ottar Ertzeid Collection of coins from the Swedish Possessions. It is a magnificent collection that has been assembled over the course of 40 years. It not only comprises outstanding objects in the five-digit regions but also fractions with estimates as low as 10 euros. While the 250 rarities will come under the hammer in Berlin on 2 February, the next 450 lots featuring mainly fractions will be called out during the eLive Premium Auction on 7 February. 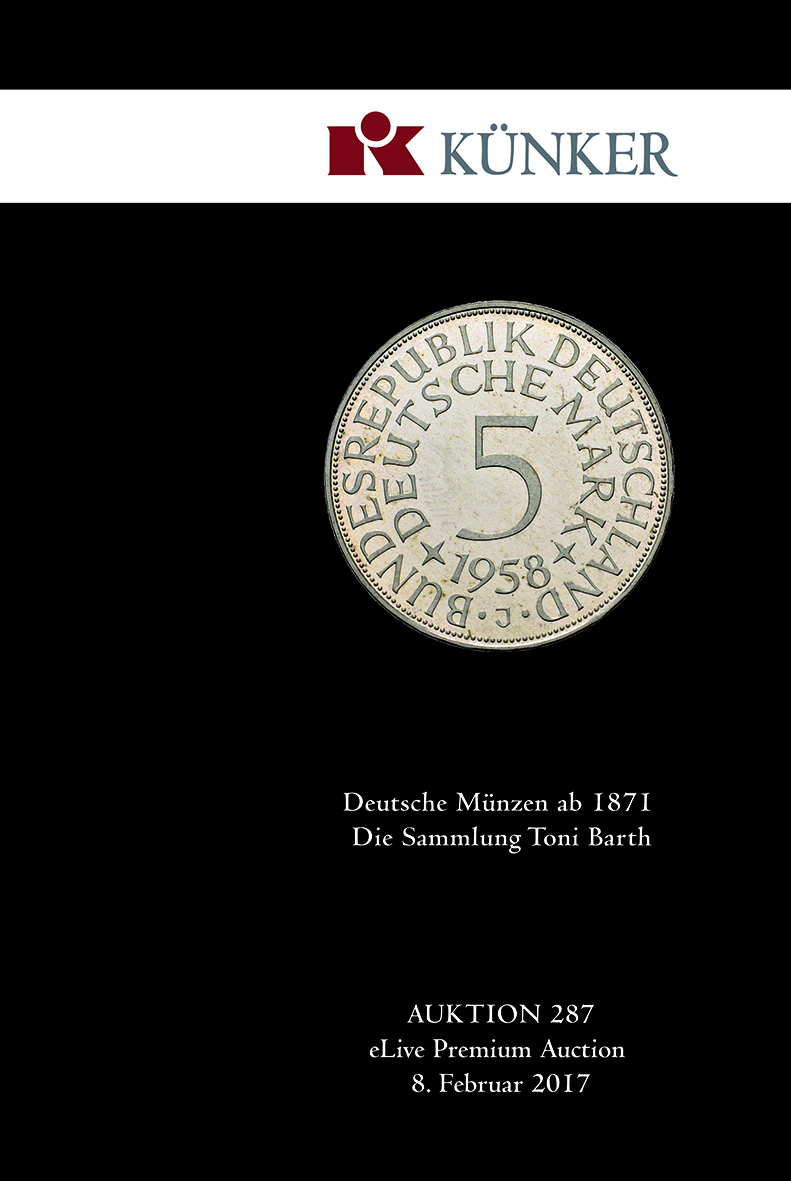 Last but not least, eLive Premium Auction 287 will be held on 8 February, offering a range of German fractions rarely found in that quality on the market. For many decades, the collector Toni Barth focused on German fractions since 1871, and with incredible patience and expertise he has assembled an ensemble in grades rarely seen. Particularly the fractions that have been in circulation for a long period of time are rarely offered in Proof. As regards the Toni Barth Collection, proof is the standard grade. Many coins could compete for the award for the best graded specimen.

The collector’s passion were mis-strikes, and so a batch consisting of almost 70 lots with mis-strikes will cross the auction block, allowing a deep insight into the minting technology of the past 100 years. Most of the estimates amount to 75 euros although this has to be considered a starting price. Since never before so many mis-strikes have been auctioned off at once nobody knows what hammer prices will be possible.